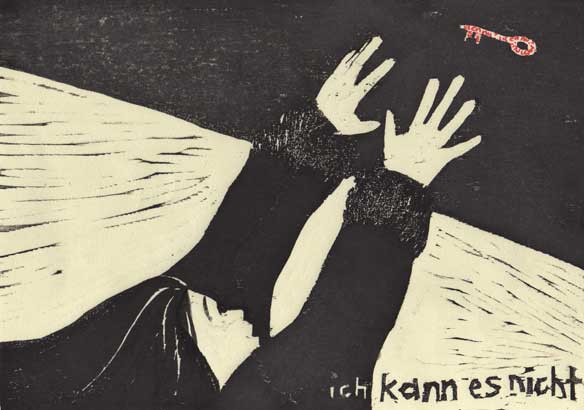 (8) She looked the gate over. On the right-hand side there was a rusty doorknob, which she began to rattle desperately.

‘What’s going on? Are we at your house already?’ Trotsky growled sleepily from the depths of her coat.

‘No, no, look at this! Listen! Those are birds!’ Trotsky leapt to the icy ground, with more agility than anyone could have expected from a chubby old tomcat. His sensitive ears peaked, and rotated like radar dishes.

‘But I don’t know how we’re going to get through the gate! And I won’t be able to hold out much longer in this cold!’ Olga cried, to which the dead standing around responded with mocking laughter.

Trotsky remained undaunted. ‘Have a feel up there, on top of the wall!’ he commanded.

Stretching upwards on the tips of her toes, Olga could just reach the top of the wall. Her hands were shaking as, breathlessly, she searched its surface. Suddenly she felt a small hard object, but her hands were so cold she was convinced she would never get a grip on it. Her stiff fingers swept hopelessly over the stones, hard and immobile, like the wooden limbs of a marionette. ‘I can’t do it! It won’t work. My hands are frozen!’ Olga sobbed despairingly.

‘I can’t do it, I can’t do it,’ Trotsky mimicked her. ‘Pull yourself together, you silly cry-baby!’ he hissed impatiently.

This site uses Akismet to reduce spam. Learn how your comment data is processed.