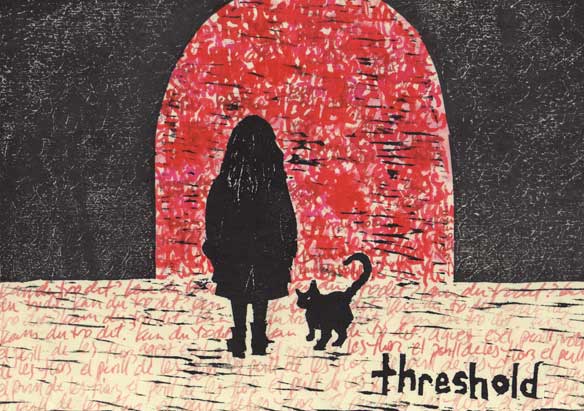 (11) Something coarse rasped the tip of Olga’s nose. Her chest was weighed down so heavily she could hardly breathe. The rasping simply wouldn’t stop, and continued abrasively over her cheeks and forehead. At last, Olga opened her eyes. The only thing she could see in the darkness was the twinkle in Trotsky’s pupils.

‘You really are the most useless girl I’ve ever met,’ Trotsky breathed, distressed. Olga felt the pleasing warmth radiating from his body down to her heart. ‘Look, the bloody gate has opened on its own!’

Olga turned her head to the side and looked over to the gate, which now stood wide open, allowing her a view which made her heart stop still: a sandy pathway led to an abundance of fiery lilies; a shower of golden broom cascaded from the right, teeming with the fragrance of freshly baked plum cakes. Beyond a sea of delicate violets, roses effused, unbridled as young lovers. Swallows swooped, twittering happily, to the waltz of the sunbeams. Olga leapt up, and ran open-armed into the warmth. She twirled through the tapestry of flowers in the meadow, spinning round and round till she fell dizzy and laughing into the grass.

‘Trotsky! Trotsky! Can you believe it?’

There was no answer from the cat. Olga stood up and looked around. Typical, the old crème-communist had slunk off again.

‘You take care of yourself, Olga Zherenkova.’

Olga looked back towards the gate, where the cat’s voice had called from. And saw that he was still standing on the gate’s threshold, outside the garden.

‘What are you waiting for, Trotsky? Come on, you’ll never find such lovely flowers anywhere.’

‘The gate can be opened from the outside, but not from the inside.’

‘If I come into the garden with you, I will never be able to leave.’

‘Yes, but outside there’s nothing but…’

‘A cat never willingly allows itself to be shut in.’

‘Don’t you realise the sea of ice is a prison?’

‘Yes, but it’s a large prison; a prison I know. How am I supposed to know how large this garden is?’

‘That’s the risk you have to take.’

‘What happens when the flowers have gone to seed and the winter comes?’

And while the birds chirruped in the garden, and the dead continued stalking souls on the sea of ice outside, Olga Zherenkova and Trotsky stood, looking into each other’s eyes, and simply couldn’t understand it.

This site uses Akismet to reduce spam. Learn how your comment data is processed.